Enfield is ready for investment and the council is offering developers opportunities, while its transport links are among the best in the capital, and are set to improve in the future.

Delegates at the Opportunity Enfield event

This was the message delivered to almost 100 of the UK’s top developers and investors, including Glenny, SEGRO, and Ikea Property Investments by Enfield Council last week.

The event at the Sky Bar in The Grange Hotel, by St Paul’s Cathedral, not only showcased views of central London but showcased Enfield's significant offer.

Councillor Alan Sitkin, Enfield Council's cabinet member for economic regeneration and dusiness development, said: “We loudly broadcast that we are open for business because in our world view, the state does not isolate itself but works hand in hand with all of the forces that will help build our economy and help our people.”

Ian Davis, chief executive, who replaced Rob Leak in April, after the latter retired from 14 years in the role, said: “I am proud and humbled to be standing here today as the new chief executive and it gives me the opportunity to drive forward a hugely ambitious regeneration programme and to push the economic growth agenda I had been leading in my previous role.”

Davis, the council’s former executive director of regeneration and environment, added: “Enfield’s role has been an enabler in unlocking potential and this lies at the heart of my vision for Enfield… [which] has always been one of London’s most important destinations: we have first class transport, green spaces, attractive housing and of course, excellent education.

He added: "The exciting thing about Enfield is that unlike many London borough’s we have the potential to drive more growth.”

The Meridian Water regeneration scheme was used by Davis as an example of pushing development in the borough though public and private partnership. The £ 6billion scheme, with Barratt London, SEGRO, and Network Rail – is set to deliver a new station in 2019, along with 10,000 homes, 6,700 jobs, new pubic open spaces, shops and community facilities.

On transport, Davis said the council has been working with the commission on the proposed Crossrail 2 South East London railway line which would deliver 12 trains an hour to the east of the borough and 15 new trains from Enfield Chase to New Southgate.

He said: “If we standstill we will go backwards. The key [is] improvement.”

As well as networking opportunities attendees were asked for their feedback on four questions in a series of workshops: what enabling means to them, how has Enfield enabled them, what are the barriers to investing in Enfield and if Enfield were an animal what would it be?

Davis also made a call for those in the room to give their opinions on the Local Strategic Plan: the public consultation will start next spring.

View pictures of the Enfield breakfast event below: 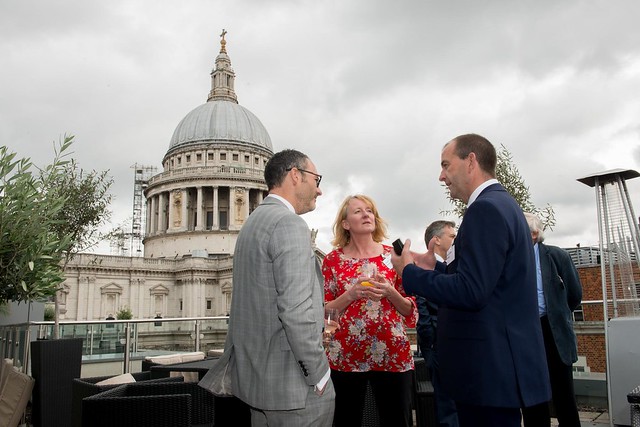 A major regeneration project planned for Angel Edmonton in Enfield has successfully won £1.1 million from the Mayor of London's Good…

Highways and parks investment due for Enfield