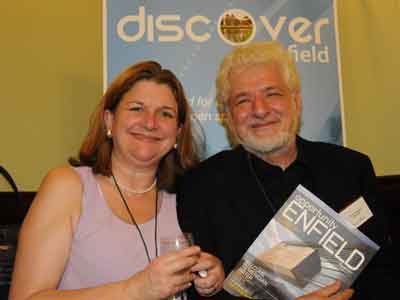 The event offered dozens of prospective developers and investors a chance to hear from Enfield leaders why the borough is a premier location for their business.

Special guest and UK Regeneration chief executive Jackie Sadek (pictured above left with councillor Del Goddard, Enfield Council cabinet member for business and regeneration) described the borough as "an awakening giant", emphasised Enfield's locational advantages and commended the local authority's strategy. "You will have inward investors flocking to your door even in these troubled times," she predicted.

"We strongly want to see a third rail track on the line to Stansted airport. And we're creating a centralised energy network to provide heat and power to a large part of north London."

And the council's chief executive Rob Leak concluded: "I like win-win-wins. Enfield is already a great place to live for its residents and it can be even greater for them.

"There's an opportunity to grow the prosperity of London by billions of pounds here. And it's a great opportunity for your investors and shareholders to make money. We look forward to helping them to do that. Enfield is definitely open for business."

...and is awarded "hero" status